Home Mindset Why Your First Deal is the Hardest—and 3 Tips for Starting Out
  
By Tommy Jia Mindset Principes Sales Sales Anxiety Skills
I’m explaining why your first deal is the toughest and I’ll share 3 tips for starting out on a sales job! 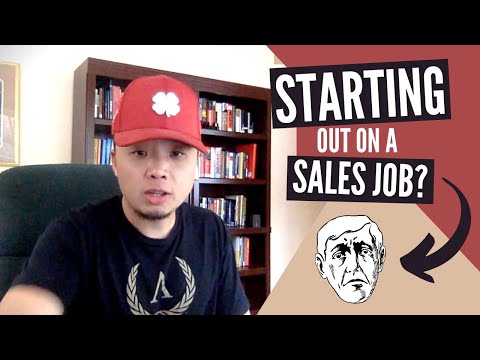 Today, I’ll be explaining why typically your first deal is the hardest when working a new sales job—and why that actually might be a good thing.

If you work in sales or have worked in sales, you’ll probably understand this.

You know the first deal’s the toughest.

And it’s actually a good thing because after you knock that first one down, you’ll have the confidence and belief to continue knocking other ones down.

But why is it the toughest?

It’s because of belief.

You see, when you start a new sales job and begin selling a new product, your belief levels at that point are typically the lowest.

This is especially true if you don’t have much sales or closing experience overall.

In fact, this is pretty much true if you’re talking about sales or any other type of activity!

When you start doing something new, your belief levels will be the lowest, so it’s most difficult for you to get traction with something in the beginning.

You’re also taking the time to learn about this new product or service.

You’re also learning about the industry, and the type of prospect you’re working with.

You’re taking the time to learn the jargon and terminology within this space.

So in short, when you’re beginning, there’s a LOT that you don’t know… so you have to learn everything.

The point here is to stick through this initial “ramp-up” period.

You simply don’t have the luxury of “knowing” exactly what to do like a seasoned rep who has been selling in that space for years!

So it’d probably be a good idea to learn from the top performers in your company—while also at the same time optimizing for learning & skill acquisition by taking massive action yourself.

Why this is a good thing when it comes to the initial struggle period of learning to sell a new product/service?

It’s because this period forces you to evolve and adapt.

It forces you to acquire the new skills necessary to be effective in selling this new product.

It forces you to apply pressure so you grow and expand.

I remember when I was selling market intelligence to procurement…

I was 1 out of a few people hired who were still in our mid-20’s at the time.

Another rep who was hired was around my age, and we were definitely two of the youngest guys in the company.

Now instead of having to struggle and fight to acquire the skills necessary to be good at the job long term, my colleague caught a “lucky” break early on in his time there.

That put a quick $5000 in his pocket—which caused him to book a vacation even BEFORE the commission landed in his bank account.

Now as a result, after he came back from his vacation, my colleague then expected his job to be easy, as his first deal was so easy.

I hope this makes sense and you’re following me.

But what that only did was make things much more difficult for my colleague.

Over the next several months…

He would STRUGGLE to get any sort of additional traction since his first deal came as a result of a lucky break—and hadn’t developed the skillsets necessary to succeed long term.

You hear a lot of about this in the online world.

But without the skillsets in place, they lack the actual SKILLS to allow them to maintain and grow that level of success.

It’s the same in sales.

That’s why you want to learn to appreciate the struggle and growth that occurs in the beginning when you’re starting a new sales jobs.

In the beginning, it’s hard because everything is new to you:

So it’s only natural that when you start selling a new product or service, it’s going to be the hardest in the beginning.

This is true for any new endeavor. Especially is you’re new to sales overall!

So buckle in and appreciate the process!

Understand that in the beginning is when you’re acquiring all the knowledge and skills that will be the foundation to allow you to be successful for the rest of your life!

So here are 3 tips for you when starting out a new sales job:

Instead of choosing to see these people as “lucky,” or just born that way, or as “having something you don’t”…

Choose to see them as doing or practicing something that most people aren’t.

Remember, people are rewarded in public for what they have practiced repeatedly in private.

Learn from the top performers, take them out to lunch, as to sit in meetings with them, and listen to their call recordings if available.

Do whatever it takes to get into close proximity with these people who are achieving extraordinary results.

Most likely, they are doing something others aren’t, and it’s important for you to model what works straight from the outset.

There is no need to reinvent the wheel here.

2. Put in the Extra Hours

There’s no way around it.

There are no shortcuts. If you want to be successful, you have to put in the hours.

When ramping up for a sales job, in the beginning, most of your time is going to be spent prospecting and drumming up a pipeline.

You’re going to have to bust your ass to generate a pipeline.

Any additional education and ramping you’ll do will have to come outside of the 9 to 5 hours your working!

The best reps that I know all put in the extra time outside of their normal work hours to study the product and sales.

You gotta understand that it’s in the extra hours is where your competitive advantage comes in.

Considering if other people are working the same 9 to 5 hours as you (actually, studies show most people don’t even effectively work half this time)

Then the real competitive advantage kicks in as you input in those hours outside of the typical 9-5.

And as you ramp for a new role, this is typically what’s required for. Rep to be successful.

Putting in the extra time outside of work hours for education, and personal development.

3. Understand The Concepts, and Deliver Them Authentically

Now here’s the other important thing:

Once you’ve begun to model the best, and put in the extra hours to study and improve…

You’ll want to understand the core principles at work and then seek to express them in your own authentic way.

You see, it’s important to understand how to learn.

I think a lot of people don’t understand how to learn.

I think Bruce Lee summed this up nicely in his quote:

“Take what is useful,

Discard what is not,

And add uniquely what is your own”

In other words, once you have studied and understood the key underlying principles of why something works…

It’s important for you to convey that in your own words. So that when you say that with a prospect, you’re using the words you would use naturally as you’re explaining the concept yourself (for the most part)

Now, modeling what works is key.

It’s also important to be able to understand something yourself, so you’re able to essentially explain it in your own words.

What you don’t want, is to regurgitate something you don’t really understand only to come off as sounding like a human-robot (which people are more perceptive than ever and can obviously pick up)

So there you go!

3 tips on what to do if you’re starting a new sales job—and why your first deal might be the hardest especially if you don’t have much prior professional sales experience.

This is the definitive 6-week playbooks on B2B sales that will break down EVERYTHING for you—from prospecting all the way to closing the deal.

I will even reveal my tips on essential topics like mindset and the habits & rituals required to win in sales!

Check it out here!