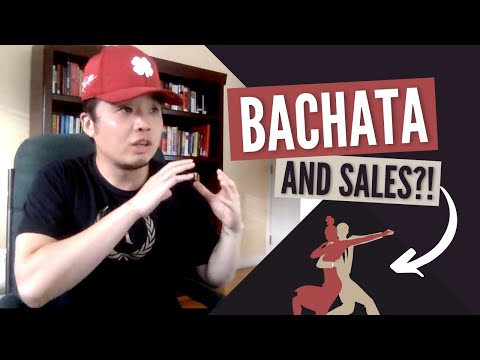 So today will be a continuation of some posts I’ve been writing on what X taught me about sales.

Last time it was David Deida, and before that was Ralph Waldo Emerson…

Today I’ll share what Bachata dancing has taught me about sales.

So in the past 5-6 years or so, I started taking Salsa and Bachata classes.

Growing up in a pretty traditional Asian family, expressiveness and sensuality was not really a thing with my parents.

It’s funny. When I was a kid in China, my 2 uncles would be incredibly affectionate with me, peppering and slobbering me with kisses up until I was 6 years old.

And I loved it!

There’s a book on love languages, and although I haven’t read it, I’m pretty sure my love language is affection and touch.

But after I moved to Canada and later to America with my parents, I never really got that kind of affection, since that wasn’t really my parents’ thing.

Which probably explains why I’m so attracted to Latin culture.

There’s a lot of affection, and sensuality in that culture, and they are NOT shy about expressing it!

So I started taking some salsa classes and then bachata classes…

And the latter I absolutely fell in love with.

I loved everything about it—the sensuality, the music, and how smooth and sexy it was.

Bachata is originally from the Dominican Republic, but in recent years, there’s been a popular surge of pop-bachata remixes.

You might know of Drake’s popular hit, “Hotline Bling,” and well, there’s a Bachata remix of that, that is absolutely FIRE.

You can see a video of a dancer couple dancing to it here.

I guess you can say #BachataGoals.

I’ll explain how it’s influenced my understanding of sales and influence.

Whether it’s salsa dancing or bachata, you have a LEAD and a FOLLOW.

Typically, it’s a man who leads and a woman who follows.

One of the things I learned dancing is that as a lead, depending on the woman I’m dancing with, she might need a strong lead or a softer lead.

In other words, in a dance, the woman doesn’t “know” what moves will come next.

Her job is just to relax, feel the man’s lead, and follow based on the physical cues he is giving her.

This might be a push with the palm or a gentle pull of the arms.

Or this might be a strong dip, or a sign to grab his open hand in front of her chest.

Whatever the cue, it’s up to the man to signal to the woman with his body on where he is taking her next.

Because dancing is a non-verbal form of communication.

What most beginners don’t realize about sales & influence is that communication, in general, is mostly non-verbal.

The good salespeople who’ve paid their dues, and certainly the great salespeople… understand that communication is mostly nonverbal.

Heck, there’s the stat commonly thrown around that communication is:

Those who understand this will DRAMATICALLY improve their influence & communication skills.

Another parallel to sales & dancing is that, you will have to lead.

It is up to the salesperson to lead the conversion.

This doesn’t mean being pushy or be a “hard-driving” salesperson!

It just means having a process and guiding your prospect down that process.

How you can that can be as much of an art as dancing.

You get the idea.

And also just like in dancing, you want to be fluid and flexible.

Sometimes if your prospect is pushing back at you, you might need to be a strong lead.

Sometimes you might have a prospect who is sensitive and very open to your suggestions, for which I might be more of a soft lead.

There’s a lot of parallels in dancing and sales.

I’m sure you’ve had instances in your life where one area of your life gave you crucial insights into another area.

This is called “cross-pollinating.”

I first heard of this when I attended Tony Robbins’ Unleash The Power Within program.

He mentioned how he will study things ranging from business to psychology to finance to botany (the study of plants) to gain distinctions and insights in human performance and psychology.

Bruce Lee did this as well.

He was a voracious reader and would study philosophy and drama—which I’m certain he incorporated into his martial arts philosophy, and career as an actor.

A good example of this is the bee. (Pun intended – keep reading, I’ll explain)

When we look at someone and think they are doing something for selfish benefit – or for altruistic reasons, it’s important to remember it’s not so black and white.

Tony Robbins uses the example of a bee.

It inadvertently carries pollen on its legs, which causes it to cross-pollinate the other flowers it lands on, causing more flowers to be produced.

When a bee goes off to create honey for selfish reasons…

Nature has designed it so that by doing something “selfish,” it’s actually helping out the greater good of the world by producing more flowers.

How wonderful is that?

Nature in her divine wisdom and glory.

As I write this post, I can’t help but think about all the great men and women throughout history. (Or today for that matter)

You pull up any of their Wikipedia pages and it’ll say “So and so was a businessman, entrepreneur, investor, writer, philanthropist, painter, dancer, rapper, etc. etc.”

I think we are supposed to have different interests.

I was on an Arete call with my mentor Andy Frisella this week, and he said as a personal brand…

What have you learned from your interests?

I am genuinely curious…

What some key insights and distinctions that you’ve learned from “cross-pollinating” your different interests?

I would love to hear from you.

Please feel free to shoot me an email at [email protected]

Meet and Lead: A Concept Learned From Great Salespeople

Learn one of the most important aspects of sales!             Hey, guys. Today I want to walk about a concept called “Meet and Lead.” It has something to do with sensory acuity, building rapport, and…

What is the Salesperson’s #1 Enemy?

Hey guys, So after having sold for a number of years and being at different sales environments, from the high pressure “force-your-prospect” “one-call-close” type of sales to more strategic B2B sales, I’ve noticed one of the biggest hurdles for salespeople….

How Important Is It for Introverts to Learn Sales?

How Learning Sales Impacted My Life as an Introvert       I believe learning sales is incredibly important for introverts. Actually, I wouldn’t say that about all introverts. I would just say that people that would like to improve…

The Fruits of Failure

Learn why failure necessary in our lives and how we can use it to our advantage! Hey guys, Today I want to write about something that’s not too often talked about. Certainly not something that’s shared publicly, but today I…

What Is The Future of Sales?

Is Our Digitalized World Affecting Sales? Hey, again! Today, I’ll be sharing some thoughts on why I think sales is STILL one of the best professions to get into moving into the future. Please know that these are my thoughts,…