The Power of Knowing the 80/20 Rule in Nature

Home Mindset The Power of Knowing the 80/20 Rule in Nature
  
By Tommy Jia Mindset Principes Skills Success Uncategorized
How does the power of this universal law affect us in our competitive life? 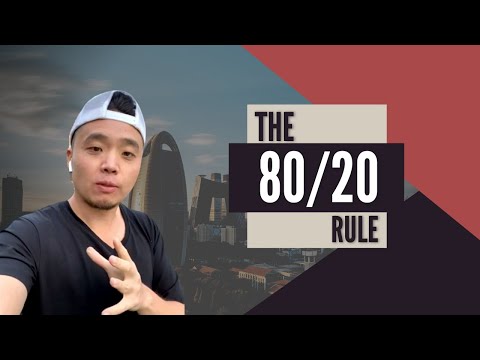 Today I want to talk about a topic that’s commonly known, but less commonly understood for the significance of its impact.

In fact, this isn’t just a rule.

This is a law of nature.

Not sure what you might officially call it, but the 80/20 Rule is indeed in fact a law of our natural universe.

Whether you look, whether it be the performance of team members, or the wealth distribution across nations, states, or villages…

You will see a distribution curve much like the 80/20 one displays.

The farther to the right side of the chart you go, the less people there will be… but those people will be the outliers producing the BIGGEST results.

Let’s take a look at the net worths of the top 5 wealthiest people on this planet:

Taking an extreme example, Jeff Bezos literally has MORE money than the entire GDP of Iraq, Afghanistan, Hungary, or Ukraine.

That’s more money then all the value generated by everybody in each of those countries.

It’s kind of like those Russian dolls where you uncover the outer shell and there’s another one inside. Followed by another one, and another one.

And so on and so forth.

So you can see here how really minute incremental changes can make a WHOOOOLE lot of difference, provided you know which levers you’re pulling on!

Getting a more and more nuanced understanding of this is an important piece of the journey to mastery.

Wouldn’t you like to know the 4% of your actions that driving a whopping 64% of your results? (I bet you do!)

Just by being aware of this phenomenon is incredibly helpful, and provides a mental model to look at the world through.

Keeping this in awareness as you intentionally develop your skillset, whether that be sales or anything else will be of INCREDIBLE value.

—because it’ll help you make more clear distinctions on what’s actually working or not.

The other thing I have been pondering on regarding this topic is that, I remember Tony Robbins teaching us how in the Olympics, the gold medal winner only might win by a hair…

But that first place winner gets almost ALL the glory.

The first place winner only needs to be a smidge better, and as a result will receive massively outsized proportions to their rewards.

So if we know this to be a pervading occurrence through nature…. The question becomes…

“How do I move myself up to the right end of the curve where the outliers are all receiving outsized disproportionate rewards?”

When it comes to this idea of competition.

I’ve found it interesting that our schools have almost shamed and belittled competition and winning in a sense by giving out “participation” trophies for everyone who showed up.

While well intentioned, unfortunately, that’s just NOT how the real world works.

Your competitor is not going to sit nicely while you catch up. They can go on scoring.

That is the real world.

If you’re reading this blog, this probably doesn’t strike you as something you didn’t know before.

Talk about competition because life is a competition. It’s our duty to be the best we can possibly be.

To think otherwise is… ignoring how nature works.

I recently read a book called: “80/20 Sales and Marketing” by Perry Marshall.

This book was an absolute gem of a book.

It has a good mix of applicable practical advice with deep timeless wisdom.

I would highly recommend it.

In this book Perry expands on the many different ways the 80/20 rule plays out in business and in life.

And that in order to effectively “see” the world, we must think in powers of 10.

I remember watching Elon Musk and other Silicon Valley entrepreneurs mention things and talk about “order a magnitude.”

If you don’t know, and order of magnitude just means something that’s 10 times greater than something else.

The reason Elon and other entrepreneurs speak this way, and use “orders of magnitude” in their vocabulary is because this is how Nature works.

This was so insightful.

To understand that what shows up between cause and effect is DIFFERENT in a straight line when plotted on a graph.

Instead it looks more like a hockey stick because it’s exponential.

—and that’s why it’s so powerful to be CONSISTENT.

I recently saw an Instagram post where Entrepreneur Aaron Nash shared how a friend has been putting in the 6 years of hard work that has gotten him the results he has today.

And in the caption, Aaron wrote…

“Consistency doesn’t always blow up quick, but it ALWAYS does.”

And what that is right there my friends, is a description of how nature actually works.

Through compounding, aka exponents, aka orders of magnitude.

I believe that no matter which way we look at life – whether through mathematics, science, the distribution of wealth in the world, or whatever it might be…

Life is all trying to tell us the same thing.

In other words, I believe that “all roads lead to Rome” so to speak.

That whatever religion you believe in, however way you choose to look at life or nature, there are a set of governing laws and principles that apply to our Universe or world.

So this brings us to the question, how can we capitalize off this rule now that we understand this shows up all throughout nature?

Well, the beautiful thing about the 80/20 rule is that as you move up along the curve, an incremental improvement can mean drastically different results.

Here’s how it plays out in real life:

The first place winner of the 100 meter spring in the Olympics virtually get ALL the accolades and financial rewards compared to the 2nd, 3rd, and certainly everyone else that participated.

But the first place winner might only be 0.01 seconds better than second place, and marginally better than the other competitors.

However, that marginal difference leads to vastly greater rewards.

This is how the 80/20 rule and exponential math appear in the real world.

When I realized this, it started clicking for me why my high performing friends would go to lengths of taking nutrition tests to see what type of foods their bodies are most optimized for, in order to perform at the optimum level.

Now I understand why they would go to lengths such as that to be competitive—and to win.

That’s because a small incremental improvement, can mean most if not ALL, the rewards.

When viewed in that lens, it makes complete sense why someone would take the extra lengths to gain a competitive edge, because that small edge can literally make ALL the difference.

In many ways, life is a competition.

Make no mistake about it.

I also like what Perry mentioned in his book about how to balance the understanding of competition with generosity and philanthropy.

I’ve talked about tithing and the impact it has had on me.

Perry mentions that if the wealthy continue to give a percentage of their wealth to those who are not as fortunate – then the world will be that much better off.

This brings me to another connection that I read about recently….

During this pandemic, I’ve been studying history with the likes of Will & Ariel Durant.

One distinction I remember learning from this couple who spent the better part of a century studying history was this:

It was that no matter what, there will be inequities in this world—because that’s how human beings and nature are.

Human beings are naturally endowed with different talents and abilities than others.

Just like no tree, flower, or animal are exactly the same in nature.

And this is why the 80/20 rule appears the way it does, because of the innate differences in nature.

As always, if you found this post helpful, all I ask is that you share it with a friend.

I invest a lot of time creating this content and would appreciate it if you subscribed to our email list to stay up to date on new content, and that you share this blog with a friend who you think could help.

What does it take to truly live a happy life? Hey guys, In the midst of work and the grind… It’s important to take time and actually enjoy life. Now, I don’t mean slowing down and taking so long a…

Avoiding Burnout: The Importance of Downtime

The Importance of Taking Breaks to Avoid Burnout! Hey, guys. Recently I’ve started feeling the initial signs of burnout. You know when you’re sitting at your desk with every intention of getting a significant amount of work done, ONLY to…

I recently just re-read Ralph Waldo Emerson’s famous essay titled: Compensation. In it, he refers to the Law of Compensation. So if you’re wondering… What does Emerson mean in his Essay Compensation?  He is in essence referring to 3 laws:…

The Art of Leadership

What are my thoughts on leadership and why is it important? You know, I want to write about something that I typically don’t write about. It’s been on my mind a lot lately. I’ve always grown up thinking that if…