Home Mindset The GREATEST Secret in Sales
  
By Tommy Jia Mindset Principes Sales Success
What is the GREATEST secret in sales… and maybe even life in general? 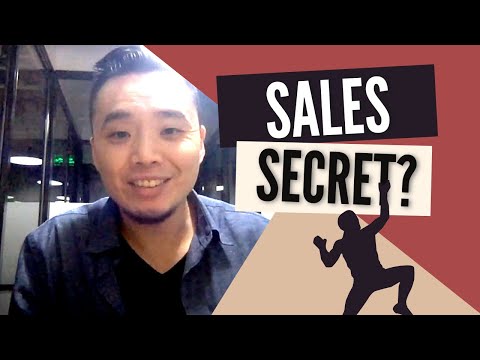 Do you know what the greatest secret in sales is?

I’ve been pondering on this lately.

It’s also something the great mystics and oracles of history talked about plenty.

Want to know what it is?

“Well, that sure sounds nice Tommy, but what does that actually mean?”

I think there are levels to knowing yourself.

But I’ll just simply describe a very obvious hurdle that most sales reps have to overcome in their journey to become a proficient sales professional.

If you’ve been in sales before, chances are you’ve had to sell or read from a script.

And if you’ve done that in more than a handful of situations, you’ll quickly realize when reading a script begins to fail.

And since I’m not going to try to explain this better than Ralph Waldo Emerson, I’ll quote him:

“There comes a time in every person’s education, when he or she realizes that envy is ignorance, and imitation is suicide.”

What does this mean exactly?

Well, I’ll explain the “envy is ignorance” part in a bit –

There is a time in every person’s life, when he or she realizes that imitation is suicide.

In other words, when copying or reciting something/someone else… is suicide.

In other words, be yourself.

We hear that very often growing up, but the part most people miss is knowing themselves first.

If you don’t know who you are, how can you know you’re being you?

How do you know you’re being true to yourself?

And what does all this deep philosophical stuff have to do with sales?

Well, one of the biggest hurdles I see beginner sales reps struggle through is that they either lean way too much of scripted material or out of date “sales guru” mumbo jumbo…

Or they try too hard trying to be “professional” or like someone else.

One of the hallmarks of an effective salesperson (or any person for that matter), is understanding that they are most effective when they are being themselves.

When their values are aligned.

When their actions match their words and intent.

These people recognize that sales at the end of the day is ultimately about TRUST.

But most corporate sales cultures don’t like to talk about that word.

It’s too “new agey” or “personal” or whatever.

But it’s the truth.

Sales is about trust.

And these people who’ve turned the leaf, understand that being authentically yourself is a superpower.

Once I realized and began practicing this, my sales felt like they got easier.

Being congruent is a big pillar in being persuasive and influential.

Put another way, people need to feel like what you say, and who you say you are, is actually what you do AND who you really are.

You have to be congruent.

You have to be real.

Because you’re being REAL.

And once people sense you’re ACTUALLY being real (because you ARE)… their guards go down, because they actually TRUST you.

I know, what a concept.

And if you’re thinking how “no brainer” this is…

It’s easy to say something’s easy to do when you’re not actually behind the steering wheel.

But if you’ve been in sales, or are getting into sales, chances are you have experienced or will experience this challenge.

As with all challenges, they are meant to help us grow.

I distinctly remember I made this realization about 2 years into my first real B2B sales job selling to professional negotiators.

Once I had this epiphany, it felt like my sales got easier.

Because for most of your life you’re taught that sales is about being pushing and memorizing canned material.

And honestly, that’s the “lowest level” of sales there is.

I don’t mean in terms of the job being “beneath” you or something; what I mean is that when you can truly have a conversation, have the prospect’s best interests in mind, and serve them and make a commission…

It starts to get real fun.

It stops being this manipulative thing you try to get over people, and instead, it becomes about genuinely creating a connection and helping someone.

Not only does it get more fun, and this point, but it also gets REWARDING—both emotionally and financially.

It gets rewarding emotionally because you realize you can make a significant income just by being yourself and helping people (how awesome is that!?)

It also is rewarding financially, because guess what?

Genuinely helping people while being your authentic self also works the best.

You won’t be a trustable person if you’re not genuine and congruent.

And if you’re not a trustable person, people most likely won’t buy from you as much as they could.

So do you see how by “knowing yourself” and “genuinely helping others,” you’ll actually be way better off both emotionally and financially?

Once you get to these kinds of sales conversations, you won’t ever have to worry about having to manipulate someone into doing something that’s not in their best interests ever again.

It’s actually in these higher-level professional sales roles where, by being helpful and authentic, is really becoming the gold standard of sales.

Think of it, if you were a prospect, would you have it any other way?

Would you rather be served or be pressured by an aggressive salesperson?

I mean, the answers a “no-brainer” right?

If you’d prefer to deal with an honest, genuine, and authentic human being over a pushy person reading a script…

Why do you think your prospects would prefer otherwise?

With all the chaos and propaganda happening in the mainstream media, the ability to KNOW WHO YOU ARE, and to THINK FOR ONESELF is absolutely essential.

Common sense doesn’t seem too common nowadays, does it?

Now, I will mention that there are so many benefits to “knowing yourself” and “being yourself” that it will probably take both of us a lifetime to explore and understand.

It certainly extends way past just the profession of sales.

Or as author Daniel Pink likes to say, “To Sell is Human.”

If we can take a step back, and get profound here… I’d like to share with you my understanding of the deepest meaning of “know yourself.”

I thoroughly believe that we as humans, are spiritual beings, and are ultimately an expression of our Great Creator – whatever you want to call it. God, the Universe, Mother Nature, the Tao…

I believe we are a manifestation of this Divine Source.

And if you agree with me on that level… and if it indeed is true… then what does that mean in terms of what we’re able to create in this world?

What does that mean in terms of our potential?

And our ability to CREATE our world?

Anyways, this is a little off-topic from our usual sales content, but I thought I would share it with you.

As always, if you found this post helpful, insightful, amusing, or informative, please share it with a friend.

I put out this content for free, so would greatly appreciate it if you could help spread the movement here at Saleslucky.

So if you found value, please share it with a friend!

How to Manage the Stress of High Ticket Sales

Bruce Lee & Sales – Focus on Meaning, Not the Words

Today we’re going to be talking about a concept that is a bit more advanced… It’s the subject of feeling… as opposed to thinking. Growing up, my parents had me practice multiplication tables while we were out grocery shopping. I…

What does it take to truly live a happy life? Hey guys, In the midst of work and the grind… It’s important to take time and actually enjoy life. Now, I don’t mean slowing down and taking so long a…

2 Powerful Beliefs That Changed My Life

2 Key Beliefs That Have Served Me Greatly Over the Past Years Hey guys, Today I want to share with you 2 core beliefs that I’ve picked up over the last few years. I want to share these beliefs with…