The Fruits of Failure

Home Mindset The Fruits of Failure
  
By Tommy Jia Mindset Principes Success
Learn why failure necessary in our lives and how we can use it to our advantage! 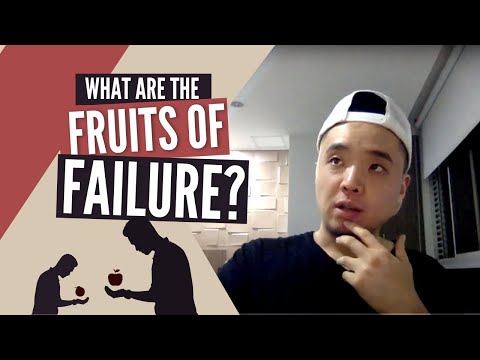 Today I want to write about something that’s not too often talked about.

Certainly not something that’s shared publicly, but today I want to talk about the indoctrination of children and in effect our society due to public schools.

Public schools were not designed to produce humans who could then go on and maximize their potentials.

Public schools were designed to produce working members of society.

They were designed to produce a workforce that would supply the demand for a booming economy.

In order to do that, the government needs people to be mass “educated” in a way that built compliance in them.

In fact, I’m sure you very well know that failure is shunned and often shamed, for anyone receiving an “F.”

However, the counterintuitive thing is that failure is often the definition of learning.

In other words, failure is learning, because learning by definition can be a process of trial and error.

It is almost impossible to get good at something WITHOUT failing a couple of times at first.

How many NBA basketball players do you know that have never missed a shot? Obviously zero.

How many salespeople do you know who have never lost a sale? None. Every single salesperson I know has had more lost deals than won deals.

In most fields, when you look at the people who are at the top of their craft, it’s often people who have failed the most.

Through those failures, they have learned and developed.

As a result, failure is actually a necessity on the journey to success.

The older I get, the more I realize how it really is all the negative, hard, or challenging times that created all the positive things and qualities in my life today.

The one unmistakable trait that entrepreneurs and top salespeople have is the ability to take any situation, no matter the environment or how much resources they have…

…and to be able to flip that situation to their benefit in some way, shape, or form.

To bring it back to the original topic – public schools don’t really support building that kind of characteristic.

In fact, it kind of does the opposite.

Schools generally discourage you from failing.

They make failing a bad and shameful thing. In fact, often times sitting there pretending to pay attention or simply following along is a much safer option.

However, the problem with this is – this is not how the real world works.

The real world does not reward compliance nor simply following along as highly valuable skills to have.

The real world rewards people who go out there, take intelligent risks, and get results.

If you just take a look at how schools are designed, the bureaucracy behind them, and how resistant they are to change and innovation…

You’ll quickly realize that their intent is for the mass production of a society of workers.

While that was an absolute necessity in the industrial age, I’m guessing that if you’re reading this blog, that you aspire for more.

One of the key differentiating traits of successful people is their relationship to FAILURE.

…but as something to embrace and grow and learn from.

When seen in this way consistently, you literally are just willing to take action unafraid of failure—because you’ll know that it’ll either be a success or you’ll get to learn something which means you’ll have improved.

In both cases you’ve won because you’ve made progress.

As a result of this mindset, successful people are resilient and are not afraid to look foolish when accomplishing their goals.

They are willing to look stupid while they learn because they know that everyone has to start from somewhere.

…and that if you don’t start somewhere—you’ll end up nowhere.

They also know that after a certain period of sucking at something… if they will just persist and continue to learn from their experiences, they will eventually stop sucking and start getting really good.

This is how it works, and I’ve seen this in my own life.

I used to suck at social skills, dealing with people, with sales and influence.

After working on this area of my life for over a decade, and sucking for quite some time, I eventually got better at it.

So as you continue to get better consistently, even if it’s just a little bit over time… what you’ll soon realize is that these efforts will start to compound.

At first you won’t notice it… but one day you’ll start getting compliments on how good you are at the exact same thing you used to suck at!

And as those compliments get more consistent, you’ll realize “Wow, I really have grown”

It’ll be a shock to you, because you didn’t realize you’ve gone through such a big growth process.

Since you’re living your life every day, you don’t see the drastic difference in yourself, but other people do.

And I’ve noticed this as my sales skills have improved over the years.

This also applies in many other areas of my life as well:

So you can see how being bad at something can actually be the fertile soil for something great to happen later down the line?

How being bad at something can actually be the impetus for you to be GREAT at that exact same thing?

There’s always a ying and a yang.

I would highly recommend you read Ralph Waldo Emerson’s essay “Compensation,” as he expands on this universal law in such a profound & poetic way that only Emerson can deliver.

He expresses how in every bad or dark situation, there is the seed of something equally greater or positive that is waiting to be sprouted.

As the saying goes,

Does this look a lot like what is happening in America right now?

As a country, it’s made us weak.

For decades other countries have been surpassing us in academics and economic growth.

We certainly live in interesting times.

The beauty of this is that in times of crisis, there is a huge opportunity to be found.

In fact, I got this tattooed on me as a reminder.

I have the Chinese word, crisis, “危机” tattooed on me.

I have it tattooed on me because crisis is made up of 2 characters in Chinese.

The first character is danger.

The second character is opportunity.

Therefore, in every crisis there is an opportunity.

As salespeople, we have plenty of situations where we can turn a crisis, aka things that we don’t want to happen… into opportunities.

This is not a talent or ability it is a choice.

It is a muscle that gets stronger with use.

I am thoroughly convinced that the great people in their respective fields – whether salespeople, entrepreneurs, athletes, or entertainers…

They all have developed the muscle of turning bad or negative situations into opportunities.

I’ll share with you an example, when COVID started, most people went in their shells.

I saw this as an opportunity to go on the offensive and build a pipeline.

As a result of my efforts, I’ve leveraged that to allow me to work remotely from Medellin, Colombia.

There are always opportunities in every crisis.

Be sure to look for them.

If you’re just getting started out in sales or would like some support getting to the next level, book a strategy session with me here.

No strings attached, we’ll chat and see how I can best support you.

Go ahead and schedule the call here:
https://calendly.com/saleslucky/free-strategy-session2

No One Is Coming to Save You

Are you still waiting for someone to get you out of the rut and carry you to success? Hate to break it to you, but… No one is coming to save you. This is a post for my youngsters out…

The Art of Leadership

What are my thoughts on leadership and why is it important? You know, I want to write about something that I typically don’t write about. It’s been on my mind a lot lately. I’ve always grown up thinking that if…

This is a quick introduction to SalesLucky.com and its author, Tommy Jia. SalesLucky is a blog designed to help aspiring sales people… Or anyone who is interested in learning the philosophies, strategies, and tactics associated with sales and influence. This…

5 Morning Rituals to Get You Set for Success

I’m sharing with you my morning rituals and how it’s helping me in multiple aspects! Hey, everyone. So in a previous post, I shared how we successfully did our first ever Saleslucky Mastermind! And in that post, I touched on…

3 Ways to Control Your Focus and Help You Achieve A Breakthrough In Life Hey, guys. So over the past week, I attended a live training by Tony Robbins and Dean Graziosi in the KBB course I purchased from them….