Meet and Lead: A Concept Learned From Great Salespeople 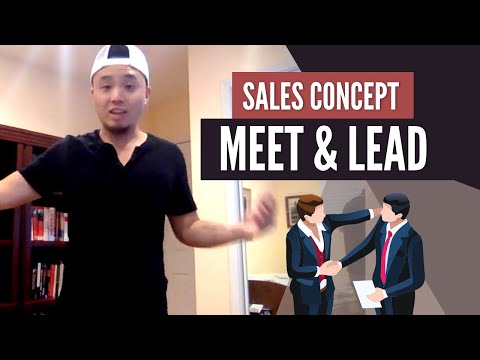 Today I want to walk about a concept called “Meet and Lead.”

It has something to do with sensory acuity, building rapport, and the truth about why great salespeople are great.

So let’s talk about what “Meet and Lead” means.

Meet and lead means when you engage with somebody, whether it be a prospect, friend, or random person at the grocery store…

…you first “meet” them at their “level.”

And then, using that to take them where you want them to go, aka lead them.

That’s “Meet and Lead” in a nutshell.

It’s simple and very effective, but it requires practice.

I’ll break it down a little bit:

You see, in order to influence someone, there needs to be rapport.

There needs to be this feeling of rapport BEFORE you can lead anyone to where you want them to go.

If you try to “influence” someone without first gaining rapport—it probably won’t work.

It’s like trying to turn on the lamp but you’re not connected to the circuit board!

I also want to touch on the topic of sensory acuity.

This is such a vital piece of what “good sales” is.

It’s the ability to perceive other people’s non-verbal cues and correctly interpret them and adjust themselves to respond effectively.

This can only be improved through PRACTICE.

A lot of people think that this is something you’re either born with or not.

—and that’s just not true.

As a matter of fact, I was not born with this.

I share often that in fact, this was a HUGE pain point for me. I was actually really bad in this area.

I was someone who constantly overthought.

I’m sure you’ve heard the term “analysis paralysis,” well, the teenage Tommy experienced that A LOT.

So I can be pretty proud to share that sensory acuity and the ability to develop rapport have been learned skills for me.

I stepped to the edge of my comfort zone, stretched it, got my reps in, and as a result, developed these skills that I can now use!

So, you can rest assured that you too, can develop these skills.

In fact, I’m confident that pretty much everyone can develop these skills with a little practice.

You’ll certainly improve if you put a little effort into them.

It’s the ability to look at somebody, and without that person saying a word…

Being able to read information about that person.

One of the main things to read is the person’s energy levels.

Is their energy high or low?

Is the person’s body language displaying them as confident and bold? Or slouched and cowered?

What does their energy say about them?

Is the person shy and quiet? Or bold and direct?

Your ability to perceive these things about people and adapt to respond appropriately will be a key factor in your success in sales and life.

There are few skills in life more important than sensory acuity and developing rapport.

If you can’t deal with people… well… you’re going to have a hard time in life.

Life is tough enough as it is.

I think most people over the age of 30ish can attest to that.

To have that added level of difficulty and friction in dealing with people, would be overbearing.

—and you don’t have to have it that way, you can learn!

Just in case I haven’t made it clear, I really sucked in this area before, and now I’ve developed a skill in this area.

You can get better; you can improve.

The more you practice this, the BETTER you will get.

Over time, you will begin to notice that you will start to pick up on character traits and behavior of people just by noticing the subtlest of things.

A helpful item to remember for this is that…

“How you do anything, is how you do everything.”

Sensory acuity and the ability to pick up on other people’s energy levels and non-verbal cues are extremely important in connecting with someone and building rapport.

This is a pivotal first step in influence.

In order to influence someone, you must first connect with them.

You must first understand them, and know what already influences them.

That sounds interesting, but what it means is just understand what they are motivated by.

The next concept I’ll share with you here is this:

When I say certainty, I mean like the feeling of absolute certainty.

The reason why certainty is so important is that whenever two people get together, and there is a rapport between them…

Then the person who is more certain will inevitably influence the other person!

Did you catch that?

If there is a rapport between two people, the person with more certainty will always influence the one with less certainty.

Then you can see how important it is to be able to develop certainty in yourself.

In other words, when you are in rapport with the prospect, the more belief you have about something, you’ll then be able to TRANSFER that belief onto others.

But it’s always got to start with yourself!

This reminds me of a story about how a father saw his son had taped together a page out of a magazine that was ripped to pieces.

On one side of the page was the entire world.

When you flipped it around, there was a picture of a man.

That was when the dad realized, “You fix the man, and the world becomes better.”

So it always starts with ourselves.

One simple but incredibly powerful way to develop certainty is to just be CONGRUENT.

In other words, it’s telling the truth.

If you just tell the truth, you won’t have to worry about what you said last time, or whatever.

The truth won’t ever bend. The truth remains the same.

Learn to be observant of people’s energy, and non-verbal cues.

Learn to meet them where they are at.

If they are high energy, then match that.

If they are low energy, then match that.

And as you gain rapport, you add more certainty and begin to lead them to where you want them to go.

The key here is being able to pick up on people and where they are and then meeting them there.

It’s being able to adapt yourself to different situations.

And I promise, it’s something you’ll get better at—with practice.

In fact, as I think about it now – this is what people mean when they say, “so and so is good with people”

It’s the ability to pick up on these cues, and effectively engage someone in a way that builds rapport and then leads them.

This is an absolutely crucial part of being able to influence someone.

Remember, if there is rapport, the person with the most certainty will influence the other person.

So as you head out into the world – make sure you are really paying attention to people.

This is what sensory acuity is about.

Noticing the little nuances in body language, energy, and tonality, so you can pick up on those cues and then respond effectively as a result.

Then, once you’ve developed rapport by meeting them at their level, it’s time to turn up the certainty and LEAD them to where you want to go.

There you go folks, one of the most important aspects of sales—

Tithing: How It Has Made Me a Better Salesperson

Tithing: How It Has Made Me a Better Salesperson The one secret that made me a better salesperson…. So today… I feel inspired to share with you one piece of information… A secret… That I thoroughly believe made me a…

Six books I’ve been munching on as I close out 2020! December 2020 Saleslucky Book Reviews 1. The Gucci Mane Guide to Greatness by Gucci Mane I was recommended this book by a good friend. A very successful friend actually….