Anxiety Before the Breakthrough 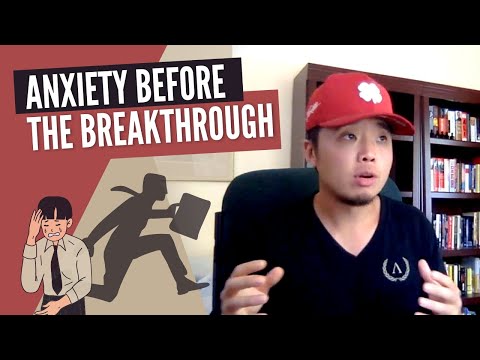 Today I want to talk about a topic that’s popped in my mind.

Obviously it’s a tough time for everyone right now.

As I talk to my friends, and even including myself, it seems like everyone is struggling in some way.

I’ve noticed that it’s easier for people to misinterpret messages, and easily get triggered.

And there’s obviously a lot of anxiety in the air right now.

But I wanted to share with you two experiences from my life where anxiety led to a huge breakthrough.

It’s almost like the calm before the storm analogy—except that this time it’s anxiety before the breakthrough.

In 2014, I started my first professional sales job at a company called IBISWorld.

I was 24 and the youngest hire on the sales team of about 50 people.

The VP saw potential in me during our interview and decided to hire me on the spot.

I felt like a kid entering into a grown up’s world.

This was B2B (business to business) sales, and we were selling to the big dogs – Fortune 1000 companies and their procurement departments.

We were selling to procurement – if you don’t know what that is, it’s the team in the company that buys and negotiates all the large contracts.

In other words, these were professional negotiators who were trained to deal with salespeople for a living.

Yeah, if this job was a video game, it was NOT set on easy mode.

Not only do procurement departments employ professional negotiators, but they are often also understaffed and under-resourced.

Which made selling to them that much harder, given their job is to save their company money.

I was 24 years old and had just come off a short stint trying my career as a rapper in LA. (I’m serious)

(You can still catch one of the videos I shot on Youtube here – https://youtu.be/xkWn0_ojUnc)

I remember being 8 months into my new job, and I was still looking to close my first “big” deal.

We were selling market intelligence, and the average ramp for a rep to get their first deal in took bout 9 months.

The sales cycle took somewhere around 6-7 months, and I just remember during the last few weeks…

For some reason, I felt anxiety around this deal. I remember having all these crazy thoughts about whether it would close or not, and whether I deserved to succeed as a “professional salesperson”

Remember, the whole reason I got into sales and wanted to improve my communication skills is that it was a huge pain point for me growing up.

This was a distinct experience that stood out to me.

Because it felt as if this extreme anxiety came out of almost nowhere, and right after that happened, the deal closed.

…and the anxiety disappeared.

Very much a metaphor for what our world is going through right now.

The second example I’ll share with you is from a couple of years later, in 2018.

By this time, I was already almost 4 years into that company and had proved myself to be one of the top reps, and one of the most consistent performers.

By now, I had felt like I had learned all there was for me to learn there, and it was time to move on.

I also just naturalized as an American citizen—which meant I could travel again.

I had taken a vacation to Colombia with my friends and had decided I wanted to spend more time there.

Long story short, I convinced my employer to let me work remotely from Medellin Colombia

But that whole approval process took a couple of months because they hadn’t really let people do that before.

And I’ll tell ya, the last month or two while I was waiting for that decision…

I felt some real anxiety.

I felt like I couldn’t sit still, and there were a couple of times when my friend and colleague Jeff, would say, “dude, just wait… don’t do something stupid and quit now.”

I felt my mind was doing backflips and stuff.

Have there been situations in your life where you’ve felt extreme anxiety just before a HUGE breakthrough?

By the way, I love traveling and different cultures, especially aspects of Latin culture.

Plus I had always wanted to make US dollars and live abroad where the cost of living is significantlyyyyy cheaper than a place like California.

In other words, this was a DREAM of mine.

And just like that first “big” deal that I closed, I felt anxiety right before this dream happened.

It’s almost like a final “test” before you get your prize.

To hold on, and keep moving forward in spite of the turbulence.

So if you’re going through tough times right now, I challenge you to find the gifts in this situation.

What if problems were ALWAYS gifts?

Lately, when I’ve been faced with a problem, I’ve been asking myself the question, “what is the gift in this situation?”

That helps my mind re-focus on the opportunities in the situation.

Anyways, hope you got value out of this post.

Let me know what experiences you’ve had where you’ve experienced similar situations.