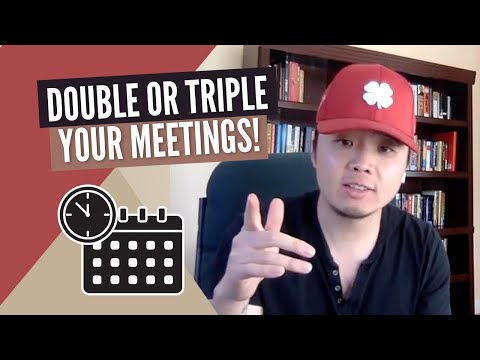 Today I’m going to share with you a tactic of mine that has been converting like CRAZY.

While it’s not a magic bullet (I mean there are none, just so you know)

This one “tactic” has allowed me to 2x-3x (maybe even more) the amounts of meetings I’ve been able to book in this crisis.

And here it is… I’m sharing it with you free of charge!

You know how when you’re prospecting, and the prospect says to you this:

“Hey (your name), this looks and sounds great, but the timing isn’t right as of now, maybe reach back out to us in 2 months”

What do you do in that situation?

Do you do what most people do?

Either completely take that as a “no” or maybe you’re more proactive and actually put a bookmark in your calendar to reach back out in two months?

If you do the former, well, chances are you’re probably NOT booking a whole lot of meetings or making a lot of sales.

If you do the latter, props to you for actually following up.

But you’re essentially starting from almost the same position as if you were reaching out the first time… because it’s been 2 whole months.

So what should you do in that situation?

Timing aside, try to understand whether the person is genuinely interested in your service or product.

It is your prospects’ JOB to stay up to date on new products and solutions.

So by definition, if they CARE about their job, and take it seriously,

They will care and are somewhat obligated to at least see or hear out what is out there in the market.

(And just as a mindset tip – understand that you are DOING YOUR PROSPECTS A FAVOR, by reaching out to them and bringing awareness to your product or solution – remember it is their JOB  to “be up on” products and services like the one you’re offering)

So if you’re targeting the right person, given that they CARE about (software, AI, Machine Learning, Market Intelligence, etc. etc.) whatever it is you’re offering…

You want to ascertain whether they are expressing interest and demonstrating that they care in their reply.

You can think of this as a spectrum.

0 = absolutely no interest, like selling lipstick to an adult male (aka not a good fit)

10 = ABSOLUTE interest, it’s EXACTLY what they want, they want it now, and they want it more than anything in the world!

Chance are, that they will lie somewhere in between those 2 numbers.

I’ll give you two examples.

What rating would you give this?

Now, how about this one?

“Hey Tommy, this sounds interesting, I’ve actually been looking into software automation for support, but right now isn’t a good time, maybe we can reconnect in July and chat then?”

What would you rate this?

But I wanted to paint the difference for you.

In the second example, the prospect is clearly telling you that they are interested in your offer! And they, in FACT, DO want to talk with you and learn more about your solution!

In fact, they just told you they’ve been looking into it and has been top of mind for them!

It’s just that for whatever reason the timing isn’t right as of now.

(could be they have other projects going on, they are undergoing a leadership change, they are going through COVID-19, or they just had a baby, who knows!)

Now, the mistake that I notice beginner reps make, is that they see the second response as a “no” or don’t see the opening of opportunity right in front of them.

So are you ready for the tactic? (Yes? Great!)

What you can do in this situation is reply:

Thank you for your response!

That’s great you’ve been looking into software automation! If it’s okay with you, I’ll send over a an invite for mid-July (because that’s what they proposed), just so we have something on the calendar, and we can always move it if we need to.

I hope that’s okay, please tell me no if you’d prefer not to!

Now, this is doing a couple things.

You’re being proactive about scheduling a meeting

(NOT being pushy, there’s a difference)

…and proposing to do something that they already TOLD YOU they were interested in DOING!

Think of it as the dentist scheduling a meeting with you, 6 months in advance for the next meeting.

You don’t tell the dentist, “Well call me in 6 months and let’s see then…”

That’d be silly and be a BIG WASTE of BOTH your times.

So the essence here is that you’re being PROACTIVE about getting on their calendar, but understand that you’re DOING THEM A FAVOR, because again…

So why not just shoot something over right now, so NEITHER of you has to spend time chasing each other down?

It’s a win-win for EVERYONE.

I hope that makes sense.

After I send that email, telling them that if it’s okay, you’ll send over a calendar invite for the newly proposed time and that if they prefer not to, to just let you know!

This is important because it gives them an out!

You don’t want to be pushy or a high-pressure salesperson.

So, if people don’t want to schedule something, allow them the option of telling you so.

Now, if they are genuinely interested as I mentioned, and either timing isn’t right, or they are just swamped…

Chances are that they will see your email, and NOT email you back.

Because now, what you’ll do, is wait two days.

Place a reminder on your calendar for two days out…

And after two days, if you haven’t heard from them, send out an invite as promised.

Chances are, this will work!

This will get you 2x-3x MORE meetings than you would if you didn’t do this!

Because you’re not letting opportunities or meetings sleep due to timing or some other circumstance.

And you’re not having to chase them down again from the jump!

When you send over a calendar invite, be sure to include a simple agenda, so that when the time comes, they see your calendar invite and can be reminded of why the meeting is relevant for them!

If they don’t remember who you are or what your company does, it’s pretty pointless and they either won’t accept or won’t show up.

So here’s what I put on the calendar invite:

This call is to learn about (Company Name)’s upcoming support initiatives & share how we’re helping other companies from a self-service automation perspective.

Brief Agenda for the Meeting:

Please accept this invite! If another time suits you better, please let me know!

And yes, this was the actual invite I used to book a meeting with the Head of Support at one of THE MOST SOUGHT AFTER companies of our time right now.

Basically THE company that everyone is talking about in this COVID situation.

Arguably the MOST sought after company in the world during this time—with not only everyone downloading and using their software but also every company trying to SELL them because of how “hot’” they are.

Who is it? I’ll leave that up to your imagination.

So there you go!

The ONE tactic that will help you book 2X-3X the number of meetings!

P.S. If you like and found value in this post, and want to learn more, I created a 6-week course called the B2B Sales Playbook—walking you through EVERY aspect of the sales cycle from prospecting to closing, including mindset as well!

It’s the all-encompassing B2B Sales Playbook, that will help you absolutely CRUSH your quota.

Check it out here!

The Importance of Traveling

Why is traveling so important—especially to people in sales?         Hey, everyone! Is there something you just can’t wait to do once things go back to “normal?” I’m sure most of us have felt quite a bit…

Intro Okay, so today we are going to talk about Qualifying and Needs Development. This can be also called Discovery, and Value Building. These different terms and buzzwords can very much be over lapping. The overarching theme amongst these concepts…

Tithing: How It Has Made Me a Better Salesperson

Tithing: How It Has Made Me a Better Salesperson The one secret that made me a better salesperson…. So today… I feel inspired to share with you one piece of information… A secret… That I thoroughly believe made me a…

Bruce Lee & Sales – Focus on Meaning, Not the Words

Today we’re going to be talking about a concept that is a bit more advanced… It’s the subject of feeling… as opposed to thinking. Growing up, my parents had me practice multiplication tables while we were out grocery shopping. I…